In recent years, I’ve often celebrated my birthday (or at least as close to my birth date – January 9th – as possible) at the theater, but few instances are as memorable as January 9, 2006, when a happy set of coincidences and Fate allowed me to be present for a moment in Broadway history (and also to meet one of my musical theatre idols).  Thankfully, I had blogged about this on Friendster (anyone remember that site?) a few days afterwards.  So here (with a few edits and explanatory Notes), is what had wrote (written):

Normally, I don’t believe in miracles, but on January 9th, I became a believer. For those who don’t know, I am a huge fan (phan?) of Phantom of the Opera (among other musicals) and an even bigger phan of one Michael Crawford (henceforth referenced as MC), the originator of the title role in the aforementioned musical. I even joined his official fan association, the Michael Crawford International Fan Association (MCIFA) in 2003.

On January 9th, 2006, Phantom became the longest running show in Broadway history, at 7,486 performances, outlasting Cats, another musical written by Andrew Lloyd Webber.  It should also be noted  that January 9th was also the date on which Phantom played its first preview.  Anyway, for months before the momentous day, tickets were hard to come by, since it had been announced that it was “invitation only” (which turns out is a bald-faced lie, but I get to that later). There had been an internet contest to win rear mezzanine tickets to the January 9th performance. I entered, of course, with only a slim chance of winning. (I didn’t win.) The weekend before, I read on the MCIFA message board that tickets were being released on Telecharge, and naturally I tried getting tickets that way. Still no luck.

January 9th comes along and it starts out like any other day (well except for the fact that it was my birthday). I decided to bring my digital camera with me, for I had planned to meet up with some MCIFA members to wait outside the Majestic Theater to catch a glimpse of MC and other VIPs before the show started; I figured I’d at least get a nice photo of MC, have dinner with my friends, Keith and Erin, then go home. Well, needless to say, things didn’t end up as planned.

So on that morning, I headed downtown to work [A/N: at the time I worked at the Bank of New York in Lower Manhattan], stopping at the Starbucks on Barclay Street, where I order my (then) usual grande Cinnamon Dolce Latte (which I highly recommend). Watson, the friendly barista (yes, I know the barista’s names at that Starbucks), upgraded my drink to a venti upon learning it was my birthday.  [A/N: this was years before Starbucks rolled out the Gold Card and the free birthday drink]. Anyway, I made my way to the office building, cutting through the stationery store to get inside. While in the stationery store, my jacket gets caught on the metal pegs where the snacks are, and I spill 90% of my coffee (luckily none of it spilled on me), and only about an inch of coffee was left in the cup. Now you may ask, why am I telling you this? Well it’ll explain my behavior later that day.

So I’m working when at 9:42AM my cell phone rings. Normally I set it on silent, but in the confusion of the coffee incident, I forgot to do so. On the phone is Lillian (a member of the MCIFA), informing that there was a spare ticket for the gala performance! I get the relevant information and hang up the phone, jumping up and down like giddy little girl [A/N: Yes, I admit to doing that without any shame]. I should also mention that the area where I work is pretty deserted so only my co-workers and my boss heard me. Later on that afternoon Keith calls to say that he also has secured tickets from telecharge.com, and I then promptly go on telecharge.com and get a ticket for Elizabeth (another dedicated phan) as a belated birthday gift.

Fast forward to 4:00PM – I left work early to meet up with Lillian, who was holding my ticket – the seat is front mezzanine, row E (right side). I arrived at the Majestic and there were a few people already gathered in the area. I spot other MCIFA members chatting with the head of security of the theater, who informs us that MC had popped out thirty minutes before. As night falls, more and more people gather – some dressed up, some not. By 6:00PM the press show up, and metal barricades are set up around the entrance and across the street.

I entered and proceeded to my seat, along with Keith, Erin and Elizabeth. On the seat were a complementary souvenir program book and a masquerade-like mask. I then hear someone say that MC was in the building, specifically almost directly below where our seats were. I grabbed my camera and start snapping photos – we called out to him and he looked up and waved at us! 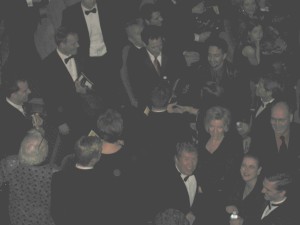 I also spied Andrew Lloyd Webber and his family in the crowd and got a few photos of them. Also spotted Michael Eisner and some other celebs, but it was too dark to tell where (and who) they were. 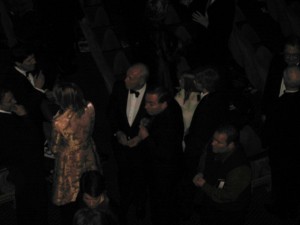 At the center, Andrew Lloyd Webber, his wife, dressed in orange-gold in front, and his two of his children behind him. I can’t tell who is standing next to ALW.

Middle row: The Lloyd Webber family in their seats awaiting the start of Act 2.

The performance started 20 minutes later than expected and there was massive cheering when it was announced that it was the record-breaking performance, and again when the chandelier started it ascent. Cheers stopped the show when George Lee Andrews (one of three original performers who had been with the show since the beginning) made his entrance. In fact there were cheers for all the leading actors, especially for Howard McGillin, who played the Phantom and Sandra Joseph, who played Christine. I have seen him numerous times over the years but his performance that night  was extraordinary (well it would be with the producer Cameron Mackintosh, the director Hal Prince and composer Andrew Lloyd Webber in the audience).

Intermission soon arrives and I heard that there was free champagne being handed out. Again, I hung around the front mezzanine overhang and again spotted MC chatting with someone. Now I have no idea where this sudden burst of boldness came from, but I made my way down (camera in hand) to the orchestra section and found where MC was. I swear my hands were shaking and I could hear my heartbeat, and I finally found him, chatting with a gentleman (I don’t know who that person was). I wasn’t going to interrupt his conversation so I stood about a foot away just looking at him, waiting. He spied me, and another girl (don’t know who she was either), who had her playbill and a pen out. MC asked me if I would like a photo with him and I nodded. I also told him that it was my birthday, to which he proceeded to wish me a happy birthday. The photo was taken (I forget by who) and I saw the lights flicker briefly – intermission was nearly over. I thanked him and made my way back to my seat.

Thinking back, I was very calm and collected when I approached and spoke to him, and to my credit I waited until I was back in the mezzanine section to get all hysterical and fan-girly. I think it was the lack of coffee in my system that made me calmer than I would have been. Act Two is as wonderful as Act One, and massive cheering ensued when the cast took their bows.

Then came “Act Three”, wherein a dancer dressed up like a Cat danced a bit and symbolically passed the baton to the Phantom, and bowed to the cast, relinquishing its place as the longest running show. Afterwards, alumni cast members came on stage, including several former Phantoms, Christines, Raouls, and Carlottas.

A line-up of former Phantoms at the Phantom Gala

They then launched into a brief reprise of “Masquerade”, then parted to admit Andrew Lloyd Webber to the stage. He made a brief speech, followed by director Hal Prince, producer Cameron Mackintosh, and choreographer Gillian Lynne. Then Lloyd Webber introduced MC, who received the loudest cheers of the night (and rightfully so!). He made a short speech as well, he embraced Howard McGillin and kissed Sandra Joseph’s hand (lucky girl!); he then went on to say that it was his first time seeing the show from the audience’s POV (who knew?), and after thanking Lloyd Webber, etc., in his best Phantom voice, bellowed out “GOOOOOOOOO!” thus releasing confetti and balloons everywhere. More cheering ensues.

Having not secured passes to the gala ball at the Waldorf Astoria (I’m not THAT lucky), we (Keith, Erin, Elizabeth and I) headed home. It was certainly the best birthday I’ve ever (or will ever) have [A/N: well, my birthday at La Cage is a close second, but, again, that’s for another blog…), and quite an unforgettable night. 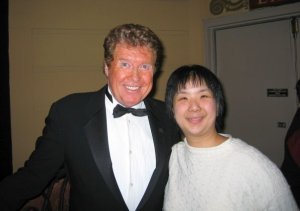 Quite possibly the BEST gift a girl could ask for on her birthday – a photo with one of her favorite actors/singers.

3 thoughts on “Let the Spectacle Astound You: Celebrating the Phantom Gala (and the best birthday EVER) – January 9, 2006 (evening)”