The first preview of a play or musical is a highly emotional experience for the cast and audience – both the cast and audience are facing the excitement of the Unknown – for the cast, it is the responsibility of presenting a good first impression to an audience who may or may not know what to expect, so there’s a palpable surge of anticipation and expectation within the theater. Similarly, the final performance of a play or musical is always a highly emotional experience for both the cast as well as the audience in attendance – the cast always give their heart and soul to that final performance, and the audience always shows their appreciation, so while there is a lingering aura of sadness in the theater, there’s also a comforting blanket of joy.

Over the years of my theatre-going, I’ve had the fortunate, yet unfortunate, opportunity to attend the final performance of a musical or play – fortunate that I was able to be in the audience to witness the performance and unfortunate, (naturally) that it would be the last time I would be able to see the show on stage, at least until the production is revived, either on or off-Broadway.  I’ve also had the rare opportunity to be able to attend a first preview of a musical (and a new one at that), but I must say it’s a far rarer feat to be able to see the first preview and the final performance of the same show, one occurring less than two months after the other. Thus begins my adventure in Wonderland, Frank Wildhorn’s modern interpretation of Alice’s Adventures in Wonderland.

I probably should preface that Wonderland had played at the Marquis Theatre, located within the Marriott Marquis Hotel, right in the heart of Times Square, one of the few theaters that is actually on Broadway (most Broadway theatres are spread out from 41st Street through 54th Street, between Broadway and 7th Avenue). In recent years, the Marquis Theatre has had relative high turnover for original musicals, with few productions running more than 2 years (discounting limited or seasonal productions). I am in the firm belief that this phenomenon (coincidence?) is due to the remnants of the metamorphosed Minskoff Curse that I had inflicted and subsequently evicted from the Minskoff Theatre (located directly across the street from the Marquis). The circumstances and specificity of the creation of the Minskoff Curse, its apparent effectiveness and the reasoning behind its removal is complex and have not much to do with Wonderland itself, but it does bear mentioning, and the details behind the Minskoff Curse will be outlined and analyzed in a future blog.

The opportunity to see the first preview of Wonderland came about when my friend Chris had a spare ticket (mid mezzanine) – I was looking forward to the performance as I had heard of the out-of-town try-outs in Tampa and Houston, listened to songs from the pop concept album, and was intrigued on how the classic Lewis Carroll story would be reinterpreted and updated. For the most part, the modern spin worked well – the Alice in this version is not a bored child living in the English countryside who falls down the rabbit hole but an overworked teacher with a young daughter living in New York City who travels down a service elevator, the Cheshire Cat is “El Gato”, the Mad Hatter is a woman with her own agenda, the White Rabbit has a magical watch, the Queen of Hearts declares “Off with their heads!” on a regular basis, and there’s also the addition of Jack, the archetypical White Knight, who makes it his mission to help Alice find her way back home and to help rescue her kidnapped daughter Chloe.

While the production received considerably negative reviews, I thoroughly enjoyed the show, and found it to be highly entertaining with a poignant message at its heart. The technical aspects were astounding: the set design (including the pre-show curtain drop showing animated illustrations from the original novel), costumes and lighting design were as vibrant and fanciful as the source material; the score was stylistically diverse, while still retaining Wildhorn’s trademark pop sound and delivered by a remarkable cast. They all inhabited their roles with much gusto and truly brought the characters to life, from Darren Ritchie’s exuberantly pompous but never obnoxious White Knight, to Karen Mason’s positively dotty yet still intimidating Queen of Hearts; from Kate Shindle’s menacing and power-hungry Mad Hatter to Edward Staudemayer’s harried White Rabbit. There were plenty of tongue-in-cheek (often theatrical) references scattered throughout – “One Knight” sung with boy band harmonies and synchronized dance steps, musical references to Evita, South Pacific, Gypsy and The Music Man in “Hail The Queen”, as well as numerous New York City-related references, though it should be noted that these elements are not included in the original cast recording (why, I have no idea). Also, outside the Marquis Theatre, there was specially created 3D street art that seemed to act as a gateway into Wonderland: 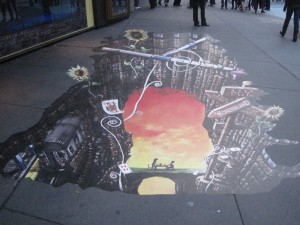 The audience for the final performance was as energetic as the first preview and after the curtain call, the audience was treated to a rather unique post-show event during the curtain call speech. More times than not, one of the lead actors would say a few words to the audience, usually about the journey he/she and the cast have gone through their run, thank the fans for supporting the show, etc. In the case of Wonderland, however, along with the usual words of thanks and appreciation, Darren Ritchie took the opportunity to praise and subsequently propose to his co-star and girlfriend Janet Dacal, to the delight of the cast and the audience in attendance. To my knowledge, this is the first (and only) on stage marriage proposal of two cast members (and the two leads, no less), and it was quite a beautiful and heartwarming moment in the midst of a normally somber time.

Naturally, the stage door area was jam-packed with theater goers wanting to personally thank the actors, along with getting their playbill signed and taking photos of (and sometimes with) them. The location of stage door to the Marquis Theatre is an awkward one, as the stage door is behind a very large circular pillar, so much of the entryway is obscured to most of the crowd waiting outside. Nevertheless, with the metal barricades well in place, the fans waited, and it was quite an overcast day already, and by the time the actors started to trickle out of the stage door, it had begun to rain (not too hard, but it was a light steady rain). Thankfully, there is an overhang in the few feet from the stage door to the street, so at least the actors would not get wet (and there were enough people with umbrellas so not too many of the fans – or their posters and/or playbills – got wet either). The wait for the actors to come out the stage door was not without its own entertainment – Cisco, the stage door security minder (I’m not sure of what his exact title is), kept the patient theatre-goers amused, informed and under control (even getting the fans who were waiting to cheer every time he chanted “Wonderland!” It worked.) Of course, there was much more cheering when the actors came out, especially for the newly engaged couple. As my wont, I was able to position myself at the front row of the metal barricades, almost directly across from the stage door, so (not to let an opportunity pass me by) I was able to take a photo of the engagement ring. 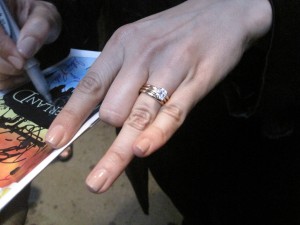 It was quite a magical and entertaining show, and it’s a shame the critics didn’t feel the same way – I do hope that this show is produced in regional theaters across the US, around the world and maybe return to Broadway in the future.