Another new cast recording, another CD signing at Barnes & Noble – while I don’t (and sometimes can’t) attend every one of these CD signings, I do make an effort to attend the ones in which I have a vested interest (or even a mild interest), so long as I’m aware of the time and place it is happening beforehand. I actually found out about the CD signing for Annie yesterday, via a post on the show’s Facebook fan page, which does highlight the importance and omniscience of social media in these modern times (or perhaps it just illustrates how much time I spend on Facebook). 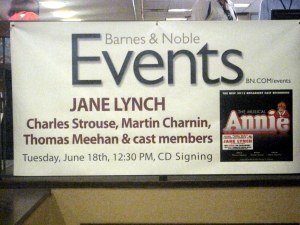 Once again, in the spirit of full disclosure, as I had written about my thoughts on Annie, my primary reason for attending the CD signing was to meet Anthony Warlow, of whom I am a great fan, and thought was a fantastic Oliver Warbucks. Of course it was also a great treat to meet the creative team as well as the cast, including newer cast member Jane Lynch, most famous for her role as “Sue Sylvester” on Glee. This CD signing was at a different Barnes & Noble store than the CD signings I previously attended, and the time of this signing was also much earlier than previous ones I have attended (at 12:30PM opposed to 5PM) so it was nice for a change to not have to spend all day waiting. Nevertheless, I arrived early, and (per usual) was first in line (and this time there was a nice bonus for this distinction, which I will mention shortly); interestingly, there were no wristbands given out with the purchase of the CD (and apparently there was also no limit to the number of CDs one person could get signed).

As the time of the CD signing was approaching, I heard (all right, overheard) some of the representatives from the show mention that Mr. Warlow would not be able to attend due to illness (apparently from food poisoning the night before), which (honestly) distressed me a bit, but it wasn’t his fault that happened (and I suppose I’ll find another opportunity to meet him). Nevertheless, the popular draw for the signing was Jane Lynch, and sure enough a good number of people waiting on line were Glee fans, and as the morning progressed, the line started to grow and wrap around the shelves. Shortly before the signing began, Lilla Crawford, who plays the titular orphan, appeared with a hand camcorder recording a video for Broadway.com.

The cast, and creative team, which consisted of composer Charles Strouse, lyricist Martin Charnin, and book writer Thomas Meehan, as well as record producer Thomas Z. Shepard, soon appeared and after a quick photo session for the press, the signing started in earnest.  The line moved steadily, and as I approached the creative team, I took the opportunity to shake Mr. Charnin’s hand and thank him (and also Mr. Strouse and Mr. Meehan) for this wonderful show. As I made my way down the end of the line, Douglas Denoff (another one of the record producers was at the other end of the line and asked to take a photo of me with the signed CDs (as he had learned that I arrived early for the signing and was first in line), which was a nice gesture, and a nice reward (if you will) of my dedication. 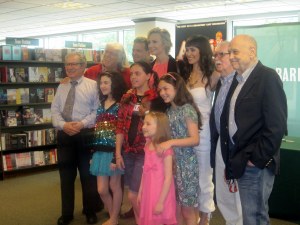 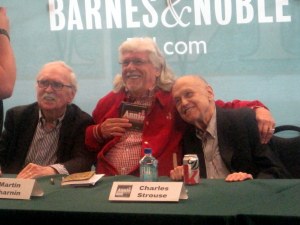 There was no opportunity to linger about, as there was a long line behind me, and everyone was being ushered out after their CD booklets were signed. Nevertheless, it was a lovely experience to meet the cast and also the entire creative team of such an iconic show, and to have the opportunity to thank them for their wonderful work. 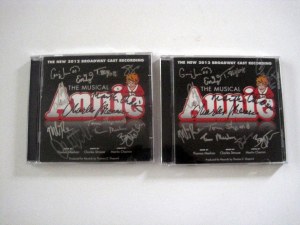 Around this time last year, (give or take a few hours) I started this theatre blog and wrote about One Man, Two Guvnors, the hilarious play I saw the day before the Tony Awards; along the way I recounted my experiences about the various shows and theatrical events that happened within the past year and recollections of the shows I had seem prior to my starting the blog. Over the past year, I have seen amazing plays and musicals (both on and off-Broadway), and have met a plethora of amazing actors and prolific playwrights, all of whom I am in awe for the talent and genius they share with countless people on a daily basis.

So here we are once more, on the day before the 2013 Tony Awards, I attended another play, though this time it was an off-off Broadway production of Hamlet, currently playing at the Seeing Place Theater in repertory with Rosencrantz & Guildenstern Are Dead, by Tom Stoppard. It is interesting (and purely coincidental) that my last two theatrical experiences were of the Shakespearian kind (and two of the Bard’s most famous and most adapted tragedies), after years of not seeing any live stage productions of Shakespeare – though technically speaking, I had seen the Reduced Shakespeare Company’s The Complete Works of William Shakespeare (abridged), which strives to recount all of Shakespeare’s plays (and sonnets) in one evening, so that kinda counts, right?

My second (non-comical) encounter with Shakespeare came about through my good friend Kelley, a Shakespeare devotee and an ardent proponent of off-Broadway and regional theater companies; she brought to my attention the Seeing Place Theater and this production of Hamlet, another play that I’m sure every student has read (or was made to read) at some point in their educational careers. Among Shakespeare’s plays (at least the ones I’ve read) Hamlet was my favorite (well, at least among the tragedies) – again, like most students, I had read the play in high school and had watched several of the film and television adaptations. 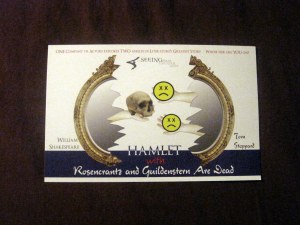 This adaptation of the Bard’s tragedy about murder, ambition and madness in the “rotten state” of Denmark was set in a sparse space with the actors adorning contemporary attire, and included the use of firearms in addition to the usual rapiers. The theater space itself was quite small, as the production was at the Sargent Theater located on the 4th floor of a building next to a police precinct in Hell’s Kitchen. This production also boasted a cast that played their parts with much subtlety, which was a refreshing change from the sometimes over-heightened range of emotions displayed in many of the film adaptations I have seen. Kudos to this cast of twelve (some doubling up on the minor roles) for their brilliant delivery of speeches and lines that have been recited by countless actors in the past, and bringing forth a new dimension in the intent of those familiar lines. 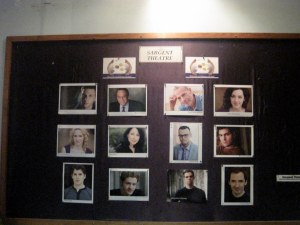 The Cast of Hamlet

Standouts among the cast included Brandon Walker, as the titular prince and Erin Cronican as the doomed Ophelia. Mr. Walker’s portrayal of the titular Danish prince was dramatic and not melodramatic – his anger was understated, and his sorrow was understandable. I had noticed throughout the production that Mr. Walker was sniffling almost consistently, which at first I found to be a bit distracting, but had dismissed it, thinking that perhaps he had a cold or was suffering for allergies and was playing through his illness. It was only afterwards when various members of the cast were chatting with other theatergoers in the lobby that I overheard Mr. Walker say that his consistent sniffling (which another patron had thought alluded to this Hamlet being a drug user) was simply an affectation (and a brilliant one at that, emphasizing just enough the grief Hamlet feels throughout the play). Ms. Cronican’s portrayal of Ophelia was brilliant – her Ophelia was not an overly hysterical, lovesick girl whose passion for Hamlet was her only reason for living; her descent to madness was gradual and believable, and heartbreaking to witness. Also notable were Jason Wilson, Alan Altschuler and Janice Hall as Claudius, Polonius and Gertrude, respectively, all of whom portrayed their respective characters as three-dimensional people and not the stereotypical villain, the loquacious accomplice and doting mother (again respectively) – they all kept their emotions in check for much of the play, letting it fester and manifest itself at the right moment, so that their outbursts are unexpected and effective.

This production is well worth seeing for its subtle performances from a brilliant company of actors – I’m not quite sure if I’ll get around to seeing their Rosencrantz & Guildenstern Are Dead, a clever pairing of plays, as the actors whose characters are in both plays play those characters in both plays (I do hope that made some semblance of sense), though I would be very interested in seeing it, if only to see how this dozen strong company tackle Stoppard’s take on these iconic characters. 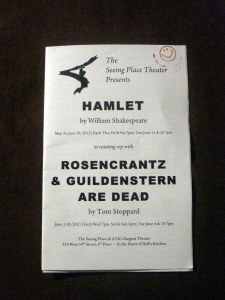 For more information about the Seeing Place Theater (and dates and times for both plays), please visit their website: http://www.seeingplacetheater.com/