Murder, revenge, love, and ambition – the Bard is (almost) everywhere in the fall of 2013, or at least for a limited time, as there are productions of Romeo and Juliet, Twelfth Night, Richard III and Macbeth on Broadway, and a production of A Midsummer’s Night Dream at the new Polonsky Shakespeare Center in Brooklyn. It’s as if the Gods of the Theater are helping me compensate for my not having seen any Shakespeare productions in the past (probably not, but it does seem that way). Interestingly, the Lincoln Center production of Macbeth is the second that I had seen this year, the first being the (nearly) one man adaptation with Alan Cumming earlier in the year, which was set in a psychiatric institution and in contemporary time. The Lincoln Center production, currently playing at the Vivian Beaumont theatre through January 12, 2014, is set nearer to the play’s original time with the customary period costumes, staging and a full cast, with much thanks to the TDF Raffle table at this year’s Broadway Cares/Equity Fights AIDS Flea Market & Auction.

To compare the two productions I have seen would be a disservice to both productions, as they are both uniquely frightening and compelling, though to have seen the full production as it was (presumably) originally staged adds to the already heightened drama of the play. All aspects between the two productions differ from one another (set design, lighting, costumes, etc.), but still have the capacity to shock and enthrall the audience. The Vivian Beaumont theatre (one of a handful of Broadway theaters in which I had yet to see a production) is the perfect space to showcase this tragedy, as the configuration of the stage is a thrust, which adds immediacy to the progression of the play.

[Fact: For those who many not be too familiar with stage configuration (myself being one) a trust stage is a one that extends into the audience on three sides, and has a wide upstage/backstage area, and entrances and exits can made via passages below the seats, with the appearance that the actors are leaving through the audience – the correct technical term is a vomitory entrance.]

The set design is sparse yet effective, with areas raised in the middle of the thrust stage to simulate tables, areas depressed to represent the witches’ cauldron, and a pair of iron-wrought staircases and walkway in between. The costumes were relatively contemporary of the play’s setting, with medieval leather armor, swords and shields as well as Victorian dress for the non-battle scenes. The sound and lighting design were astounding, from the atmospheric chanting to underscore the action to the gentle twitter of birds in the distance; the lighting was also striking with the use of light and darkness to accentuate the tension without undercutting the horror – while the murders take place on stage, they are not so much seen but heard, which makes the deeds even more frightening. The cast was astounding, from Byron Jennings, John Glover and Malcolm Gets as the three witches, shrouded in tattered robes with their feline familiars, embodied by a trio of actors (Patrick Vaill, Paul Kite and Stephanie Fieger) who added a level of creepiness to the malice they would inflict on susceptible Macbeth, played superbly by Ethan Hawke as a man reluctant yet resigned to his prophetic fate and goes to great lengths to ensure his destiny to Anne-Marie Duff, as the pragmatic Lady Macbeth prodding her husband to his bloody fate, and meets her own dour destiny.

The stage door experience this time round was inadvertent, as this was my first time at the Vivian Beaumont, I didn’t know where the stage door was – nevertheless I stumbled upon it as I found my way out of the Lincoln Center area. There weren’t too many people about (probably due to the lateness of the hour and perhaps not knowing where the stage door was). I didn’t stay too long either, though I did manage to meet a few of the cast, who were all friendly signing playbills and such.

All in all, I do recommend seeing this production of Macbeth for a classic tale of greed, murder and ambition showcased as it might have been back in Shakespearean times. Modern adaptations of this bloody play are all well and good, as it is evidence of the universality of the play’s themes, but there is something gut-wrenching watching a full production in period costumes and effective technical design that makes the story all the more terrifying.

Then again, I did see this production the night before Halloween, so that might have had an influence as well. 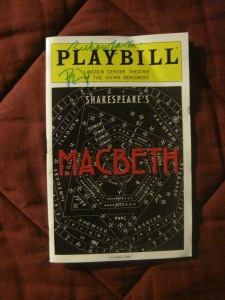