In continuing my (inconsistent) quest to experience (most things) Shakespeare (despite missing both Twelfth Night and Richard III last season), the next opportunity presented itself via the annual summer tradition Shakespeare in the Park. This year’s plays being Much Ado About Nothing and King Lear, the former one of my favorite comedies and the latter one of the few tragedies I have yet to read (though I know the basic plot). As mentioned in previous posts, Shakespeare in the Park is an outdoor event at the Delacorte Theater, located on the Upper West Side, presented by the Public Theater, wherein tickets are free for the public and obtainable via virtual lottery or simply waiting on the standby line in the park (tickets can be reserved with a donation to the Public Theater). Performing live theater outdoors is a time-honored tradition dating back many, many centuries, and was, in fact how Shakespeare’s plays were originally performed at the Globe Theater in London, where weather conditions impact any given performance. 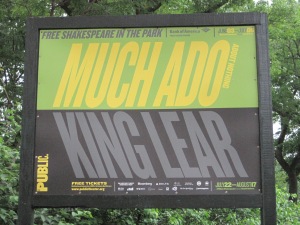 Performances of Much Ado About Nothing began June 3rd, and it was by sheer luck I obtained my ticket via the virtual lottery (the second time I attempted to do so). So onward to the Park I went, the weather yesterday being overcast yet breezy (with rain expected late in the evening). The play deals with the impact of the assumptions made upon overheard conversations upon two couples and the consequences that eventually lead to a happy ending expected in a Shakespeare comedy. Moments of levity and drama intertwine as one couple is brought together and the other torn asunder through misdirection and misinformation. The trend of adapting and presenting most Shakespearean plays (whether on stage or on film) is to set them in different locale and in more contemporary time periods, dress, etc.; this production is set in the place and time period in which the play is set. The set design is of the exterior of an Italian villa, complete with two garden patches and a small fountain wherein the cast wander through, as the play unfolded.

The cast was fantastic, though at times it seemed they were just reciting lines (as last night was only their second performance, that vibe is understandable, as the cast will no doubt find their own footing and inflections as the run continues). Hamish Linklater and Lily Rabe as the sparring Benedict and Beatrice (both of whom I had seen a few years ago in Seminar) imbued the right balance of animosity and tenderness; Brian Stokes Mitchell was astounding as Don Pedro, a commanding presence on any stage, and Pedro Pascal (probably best known as [the late] Oberyn Martell on the epic TV series Game of Thrones) was equally amazing as Don John, bastard brother to Don Pedro. My initial introduction to Much Ado came from the 1993 film adaptation, which boasted its own stellar cast, and while it has been many years since I watched the film, it was difficult for me to not think of those performances while watching the play live on stage: to wit, Jack Cutmore-Scott’s performance as the lovelorn Claudio resembled that of Robert Sean Leonard from the film (and from my vantage point from the left rear side of the theater, the physical resemblance was similar).

This was another instance where I did not wait by the stage door for the actors to emerge, as I learned that there isn’t a singular stage door area from which the actors emerge (I was told that the actors would leave the theater via any of the theater’s four separate entrances/exits); also, it had begun to rain at that point (thankfully immediately after the show ended) so I wasn’t in a mood to patrol each exit on the off-chance I might see any of the actors. Nevertheless, the Park is still quite lovely at night, with lampposts dotting the various trails, illuminating the trees surrounding the Park. Much Ado About Nothing runs from now through July 6th, with King Lear running from July 22nd through August 17th. I do recommend seeing this production (and I might attend another performance later in the run to gauge the production as a whole). All in all, ’twas a fantastic way to spend an evening in Central Park: nothing beats live theater under the stars (or overcast sky). 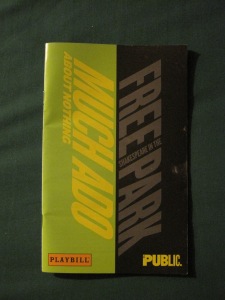