A person’s sense of identity and freedom to (or at least attempt to) express their true self is often tied to their upbringing. The expectations a parent has for their children and its impact on their sense of identity and perception of those around them is at the heart of Kinky Boots, based on the film of the same name, which in turn is based on true events of a struggling shoe factory in Northern England changing its product from men’s formal shoes to flashy men’s high heel boots. This is the second (of four) pair of tickets obtained at the Broadway Cares Flea Market, and I had an interest in seeing the show, thankfully before its closing date in April 2019. I wasn’t familiar with the source material, though I was familiar with some of its songs, originally written for the show by pop singer / songwriter Cyndi Lauper. 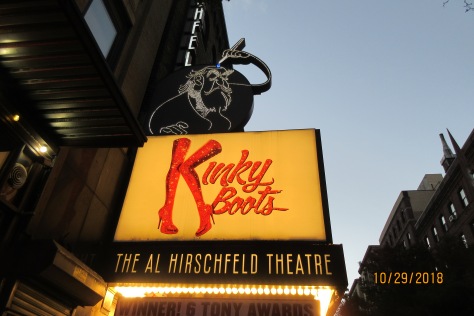 The story follows Charlie Price, whose father owns and runs Price & Sons, manufacturing men’s shoes. While Charlie was raised in the family business, it’s one in which he had little interest; his inheritance of the family business after his father’s death leaves him at odds with himself. A chance encounter with a drag queen named Lola (and her woes in finding appropriate footwear for her act) gives him the inspiration to save the family business. The interactions between the working-class factory workers and the flamboyant Lola and her “angels” is a source of friction at first, but are resolved in the end, with acceptance from both sides.

As the second consecutive show to feature a score written by a pop artist and featuring a premise with a clashing between tradition and modernity (not to mention sparkly costumes), I enjoyed Kinky Boots and its message of being true to oneself in the face of prejudice, and overcoming the (oftentimes) overwhelming expectations placed upon them from a parental figure, in this case, Charlie’s and Simon’s (Lola’s real name) fathers. The set design was fantastic, with traditional moving set pieces, and plenty of glitzy strobe lights. The cast was fantastic – J. Harrison Ghee was phenomenal as Lola / Simon, displaying the gamut of emotional range – flamboyant and confident in “The Sex is in the Heel” and “Land of Lola” to vulnerable in “Not My Father’s Son” an “Hold Me in Your Heart”. Mark Ballas (of Dancing with the Stars fame) was surprisingly good – I had seen him on TV as a dancer, and was unaware that he was a singer as well. There was a short speech after the curtain call for the bi-annual fundraising effort for Broadway Cares.

The stage door scene was not too crazy, though it was a fairly brisk evening; most of the cast came out to sign playbills and pose for photos. I had a fantastic time at Kinky Boots and was glad to have seen it before its final performance. Its message of being your true self (despite what adversity you may face) is a powerful message in this day and age. Amid the glitz and glamor (and the accompanying up-tempo songs) there are moments of quiet introspection that are just as valid and valuable.

As the final songs says: