I can’t even properly process what I felt when I saw the staged reading of Kelley Blessing’s play You Don’t Know How It Feels, which tackles the issue of child sexual abuse from the victim’s perspective – the loss of innocence, the stigma of shame and (eventual) road to recovery. The conflicting, often confusing emotions associated with such a heinous act is unfathomable to comprehend from an outside perspective, yet there are far too many people who know how this feels. Sexual abuse happens and can happen anywhere and to anyone, regardless of race, gender, or age, yet it is often not discussed in public.

This play aims to break that silence.

I was invited to reading by Kelley, which took place at the Matthew Corozine Studio Theatre presented by Darknight Productions. While I’ve read many of her other works (often as a quasi-dramaturge / editor) and attended a staged reading of a musical she co-wrote (The Sounds of Screams), this would be a totally different experience, as You Don’t Know How It Feels is semi-autobiographical. 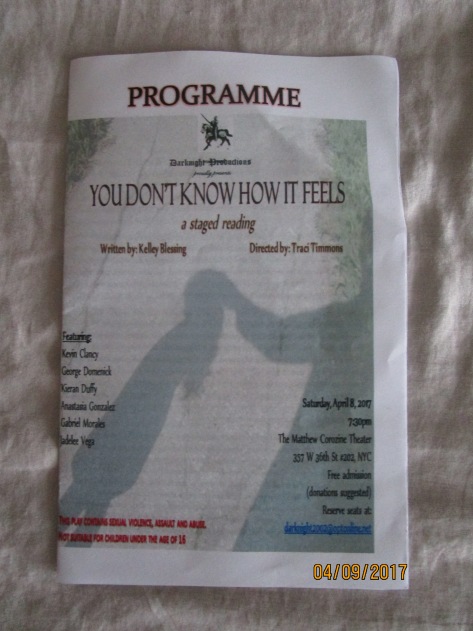 [Disclaimer: Kelley has been a friend of mine for many years, with whom I’ve shared many theatrical experiences as audience members, yet I was unaware of this traumatic incident that happened long before I met her. It had not crossed my mind to ask, and I suppose it’s not something she would willingly share. I’m debating whether or not to follow up this entry with an in-depth interview / discussion about the process of writing this play. Our friendship started with our mutual love of musical theatre (and Sherlock Holmes), and remained jovial through the years, so I would not want to inadvertently trigger any additional trauma (if that’s the right term) by having her revisit those memories. Then again, the purpose of writing this play is to give a voice to the voiceless, so this story needs to be told.]

The play takes place in a middle school gymnasium and focuses on the interactions of high school track teacher Nick McCoe with three of his students – Dena, Sara and Devon, as well as with the principal, Frank Stanley. The interactions between McCoe and his students seem harmless at first, then turns sinister, as he targets Dena, and manipulates her into keeping his subsequent assaults a secret. The resolution in the play is fairly optimistic, as Sara and Devon, Dena’s best friend and boyfriend, respectively, discover the root cause of her mood swings, report their findings to Principal Stanley and McCoe is exposed (no pun intended) for his crimes.

As it was a staged reading, the actors had scripts in hand, and as it was the first reading, much of the dialogue came across as stage dialogue rather than natural speech. Gabriel Morales perhaps had the most difficult role in playing Mr. McCoe, juggling the Jekyll and Hyde personas of the helpful teacher and manipulative predator with subtle stealth so as to break the façade he created. As Dena, Jadelee Vega had an equally difficult task of portraying the range and depth of emotion required to recount this harrowing experience. The overall design was effective – the set design sparse, the lighting design reflective of Dena’s inner turmoil and the sound design jarring as it should be. While the subject matter was disturbing, it was not overt, as the instances of assault occurred off stage.

There was a talk back with the cast and creative team with the invited audience encouraged to give feedback to the piece. Constructive criticism was presented, along with insight from the cast and creative team with regards to the process of developing the play. There is great potential for this play to have a future in a broader venue, as the issue of sexual assault, especially against children, is a crime gaining attention as victims are coming forward to tell their story, bringing awareness so as to (hopefully) prevent them from happening, and bringing the perpetrators to justice.

This is a start.