Broadway Cares / Equity Fights AIDS (BC/EFA) is a stellar organization that supports a variety of social causes, and has a multitude of fundraising events throughout the year. One of their most popular events is the annual Flea Market & Grand Auction, held on the last Sunday in September, often referred to as “Broadway Christmas”, as fans can obtain almost everything theatre related, from vintage and contemporary playbills and /or posters (signed and unsigned) to prop pieces and costumes worn on stage, as well as the typical flea market items (books, CDs, and baked goods). There’s also an autograph table with a rotating list of theater actors, a silent auction for unique (usually signed) items, and the Grand Auction, where extraordinary experiences such as walk-on roles for specific shows, backstage tours and opening night tickets for next season’s shows are up for the bidding. The Flea Market & Grand Auction starts at 10 AM and ends at 7PM (the Grand Auction starts around 5PM – I think. I never stick around to watch the Grand Auction, as it’s somewhat distressing to not be able to afford the starting bid for such unique experiences; besides, by that time I’m usually exhausted and out of funds.) 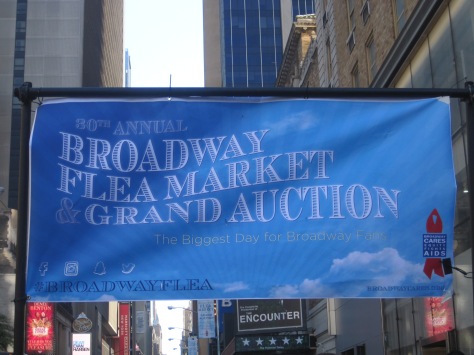 There are a multitude of tables, most of which are show specific, selling memorabilia from their shows, but by far my favorite table is the TDF Pik-a-Tkt table, where you can win a pair of tickets to Broadway and off-Broadway (and sometimes off-off Broadway) shows. It’s one of the most popular tables, and (in my opinion) one of the most addictive, and probably one that raises a lot of money. The premise is simple: there are three medium sized containers full of (stapled) raffle tickets; if one of the raffles has a winning stamp, you are awarded a white envelope with a pair of tickets, or a voucher good for two tickets. The envelopes are sealed, and are randomly selected by the volunteers working the table, so there’s a level of suspense and (sweet) anticipation of finding out the winning show. Then there’s the “trading pen” – well it’s it’s not really a pen per se, but it is a quasi-contained and designated area where raffle winners confer with one another to maximize their winnings by either straight trading for different shows or change show dates. It’s a kind of networking and semi-collaborative effort to get the shows (and the date) you want, and a pretty good way to get to know fellow fans.

I’ve mentioned the BC/EFA and its Flea Market & Auction in most of my entries, as it’s usually the source of where I’ve obtained tickets to the many shows I’ve seen (and blogged about) thus far. I’ve attended the Flea Market & Auction for the past fifteen years, and in recent years I’ve spent the bulk of my day actively participating in the TDF table, usually winning a multitude of tickets every year, sometimes making good trades, and sometimes not (depending on which shows I’ve won and my willingness to trade). I also spend the day perusing the other tables picking up interesting trinkets or CDs, almost always taking copious amount photos of items for sale (for posterity), wishing I had the funds to purchase them. Even though there are designated tables where credit cards are accepted, I always bring a set amount of cash with me, thus limiting my spending ability (and to ensure that I don’t bankrupt myself inadvertently). It’s also a day on which I can easily see friends I’ve met through the various shows I’ve seen (usually bonding at the stage door), friends I’ve known since high school and “friends” I’ve encountered and interacted with at the TDF table (usually in the trading area. 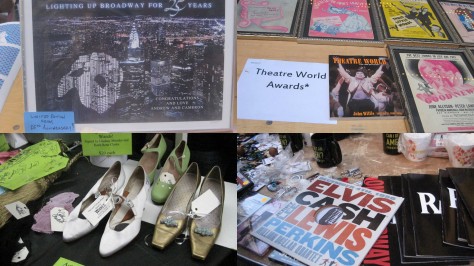 As it’s an outdoor event literally in and around Shubert Alley, weather is a key element. The weather is almost always fair in temperature, sometimes with overcast skies; sometimes it’s warmer than usual and sunny. There was one year when it was indoors (at the now closed) Roseland Ballroom due to the torrential rain. In years past, West 44th Street was closed off so that the entire street (and sidewalks on either side were full of people looking for great deals on theatre-related items, which resulted in congestion and crowds around the more popular tables. There had been a few years when the pedestrian areas in the middle of Times Square were used to station tables, which spread out the Flea Market experience. The 2016 Flea Market was different than it had been in previous years in that only half of West 44th Street was cordoned off for tables, allowing for ongoing (one way) traffic the other half of the street. The flea market then wrapped around to West 45th Street with the same configuration, and was limited to that city block; Shubert Alley remained in use as it always had been, and the use of the pedestrian areas in Times Square proper were not utilized. I suppose this was done to ease traffic (for cars and people alike) in the area, as Times Square is already a popular and (usually) overpopulated area on any good day.

It’s always a fun day and a great start to the new Broadway season. As the title of this entry says, it’s my Once-a-Year Day, where I have loads of fun, meet up with friends and find the most unique theater-related items (and win lots and lots of show tickets). All the proceeds go to a worthy cause and helps scores of people throughout the City and across the country. For more information about Broadway Cares and the other Events it holds, visit their website: https://broadwaycares.org/