Music is often called the universal language, with its unique ability to invoke emotions and / or memories (good, bad or neutral) shared by a wide cross section of people, regardless of gender, race or ethnicity. Musicals have that similar pull, even if the score is sung in a different language that one’s own native tongue; while some of the lyrics might not be exactly the same, the overall theme remains intact. I don’t often get an opportunity to see familiar musical performed in different languages (though I have listened to non-English cast recordings), I was intrigued by the production of Chicago performed by Takarazuka Revue, a Japanese, all female theatrical company, finishing its limited run today at the David H. Koch Theater, as part of the Lincoln Center Festival.  More information about Takarauka can be found on their website: https://kageki.hankyu.co.jp/english/

The overall design was the same as the current Broadway revival, which is now the longest running American revival in Broadway history, celebrating its 20th year on Broadway. Its minimalist set design, limited use of props and practical costumes allows the actors’ performances to shine and the songs to be the centerpiece. The story of Chicago is about the trials and tribulations of Velma Kelly and Roxie Hart, two “merry murderesses” and the hoopla around creating celebrities from known criminals. The show’s themes have a such a timeless quality and omnipresent relevance that it’s revelatory that the original production was four decades ago – John Kander and Fred Ebb were certainly visionaries in that respect (of course, all their collaborations are brilliant). 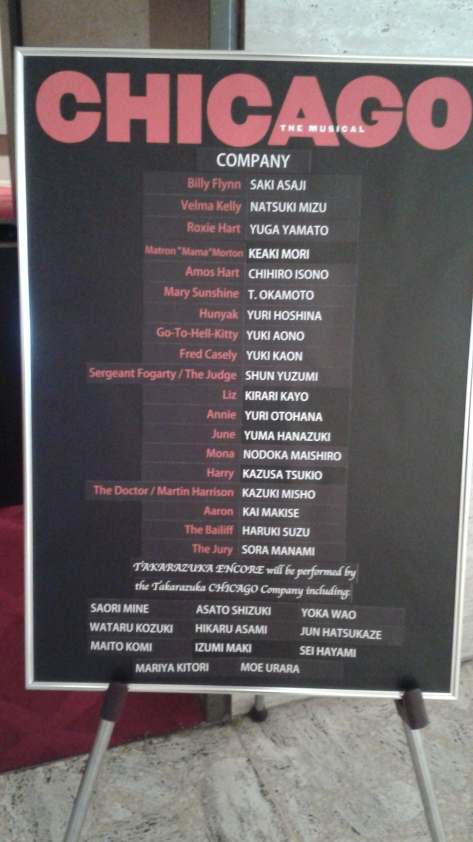 The all-female cast of the Takarazuka Revue was astounding, and the choreography meticulously synchronized; stand outs among the leading cast were Natsuki Mizu as Velma Kelly, Yuga Yamato as Roxie Hart and Saki Asaji as Billy Flynn. As the entire show was in Japanese, there were super titles above the stage so the non-Japanese speaking audience could follow along, though I was quite familiar with the songs (and much of the spoken dialogue) that I focused more on the performance and less on reading the super titles. Per their tradition, after the curtain call, there was the “Takarazuka Encore” – a spectacle wherein the cast performs a medley of songs (in English and in Japanese) with lavish costumes and brilliant choreography.

Overall, it was a different yet familiar experience of a story that serves as a reflection of society today and reminder of the fleeting nature of celebrity and the power of the press. I would love to see other productions from this amazing troupe of performers, and hope they will return to New York in the near future.