The search for the meaning of life and the quest of finding a place in the world is a universal and eternal journey everyone makes and takes at some point in their lives. Some know exactly who they want to be and what they want to do and travel down one road, while others meander through various paths in the search for the right track. Distractions and doubt can deter or delay the journey, resulting in a detour that could lead one down a different path than intended, to a place unexpected and extraordinary; such themes are at the heart of Pippin, currently playing at the Music Box Theater. This Tony Award winning revival started its life at the American Reparatory Theater (A.R.T.) in Cambridge, Massachusetts, and soon transferred to Broadway; I was familiar with the story and score, though having only seen the filmed production in the early 1980s. When I learned about this revival, and the presence of Terrence Mann in its cast (more on that later) I was piqued by the inclusion of the circus theme – I had heard and seen (via YouTube) much about this production, and their performance on the Tony Awards cemented my interest in seeing this show. Once again I headed to TKTS to obtain my ticket, along with my good friend Kelley, and was glad to see that the show was up on the TKTS boards, albeit with a 20% discount (a 20% discount is better than none, I suppose).

The story of Pippin starts with the introduction of the Leading Player, the mysterious and alluring ringmaster, who guides the titular character, the son of Charlemagne, through his quest of finding his place in the world – his “Corner of the Sky”. The use of the circus theme is accentuated with the show’s opening number “Magic To Do”, with the cast of players performing amazing feats of acrobatics and Bob Fosse-inspired choreography, which works spectacularly well as a construct for the show. While all the acrobatics were thrilling to watch, at times it was a bit overwhelming to see them all at once – there were times I wasn’t quite sure where to focus my attention among the amazingly talented and agile ensemble cast, so I might have missed seeing some of the performers. The lighting and scenic design was inspired and complemented all the actions onstage. 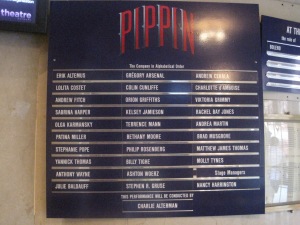 The principal cast was astounding (most of whom I had seen at met at the CD signing a few weeks ago) – the Tony Awards bestowed upon Patina Miller and Andrea Martin (as the Leading Player and Berthe, Pippin’s grandmother) were well deserved. Both were brilliant in their respective roles: Patina Miller is a formidable triple threat – an amazing singer, a graceful dancer and a fantastic actress (who can also sing, walk and hula hoop all at the same time); Andrea Martin basically stopped the show for a few minutes after her number “No Time at All” – critical reviews had alluded to her performance in that number was not to be missed, while giving little detail as to why this was the case. After seeing her performance, I wholeheartedly agree with the critics (for a change), and I won’t spoil it here either – all I will say is that the thunderous ovation she received was richly deserved. Terrence Mann and Charlotte d’Amboise were equally amazing as Charlemagne and his wife Fastrada (it’s also a fun fact to know that they are also married to each other offstage) – Terrence Mann was a delight to see in every scene he was in, and Charlotte d’Amboise is a fantastic dancer.

The stage door experience was a fun one, as always, with a small crowd of people waiting outside – I wasn’t quite sure if many of the actors would come out the stage door, as I attended a Saturday matinee, and there was another show in the evening. I’m sure most of the actors were resting up, as there was much movement and action going on onstage. Happily, Matthew James Thomas, Andrew Cekala and Rachel Bay Jones emerged from the stage door to sign playbills and to pose for photos – all three were fantastic in their respective roles as Pippin, Theo and Catherine, and chatted with those at the stage door a while. 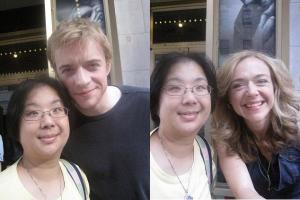 Needless to say, I thoroughly enjoyed this production and all the energy and theatrics on display from a truly multi-talented cast – if a Tony Award for Best Ensemble ever existed (and I really believe there should be one), this cast would be awarded with one. There was a lot of Magic To Do onstage, and for a few hours I did feel as if I was transported to their world, and (almost) makes me want to run away to join the circus.