As mentioned previously, the Broadway in Bryant Park series is a free lunchtime concert wherein a group of shows perform a few musical numbers from their respective shows, but the fourth week in the 2012 edition featured quite a mixed bag – one solo performance, one upcoming musical, one Off-Broadway musical, one play with music and one long running musical: respectively (and in order of performance), My Sinatra, Chaplin, Silence! The Musical, One Man, Two Guvnors, and Mamma Mia!. Of course I arrived at Bryant Park early, and in contrast to the previous time I was at the park, the weather was sunny and seasonably warm. The seats around me filled up quickly, though there were a few who opted to linger around in the shaded areas. The 106.7 Lite FM host this time around was Rich Kaminski. 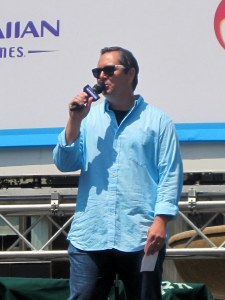 The first show to perform was My Sinatra, playing at the Sofia’s Downstairs Theatre, which is a solo performance piece that has Cary Hoffman, a Frank Sinatra sound-a-like (and he did sound a little like Ol’ Blue Eyes), recounting the influence Sinatra had on his life and upbringing. He sang “Fly Me To The Moon” and “Summer Wind” decked out in a full tuxedo (surely not an easy feat on a hot and humid afternoon), and his set was more or less a warm-up act prior to the formal start of the program. 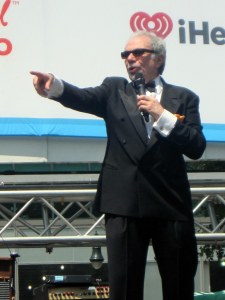 The next show to perform was the upcoming musical Chaplin, which starts its preview performances on August 21, 2012 at the Ethel Barrymore Theatre, and tells the life story of Charlie Chaplin. Stars Christiane Noll, Rob McClure, Jenn Colella sang, respectively “Look At All The People”, “If I Left London”, and “All Fall Down”. The songs were catchy, and had the jaunty feel of the music from that era. It will be quite interesting to see how the show is staged and the overall tone of the musical. 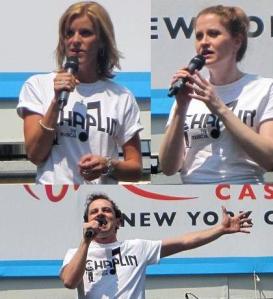 Next up was Silence The Musical, the unauthorized parody of the film Silence of the Lambs, currently playing at the Elektra Theatre. The cast included David Garrison, Jenn Harris, Stephen Bienskie, Kimberly Stern, Topher Nuccio, Nick McGough, Randy Harrison, Ronica Reddick, Howard Kaye and they sang “Silence of the Lambs,” “Are You About a Size 14?”, “Papa Shtarling”, and “Finale”. Despite having not seen the movie, I know enough about the basic plot to appreciate the premise of the show.

Next was One Man, Two Guvnors, currently playing at the Music Box Theatre until September 2, 2012, and is a hilarious farce about the lengths one man will go to juggle having two guvnors (employers), keeping one from knowing about the other, and to get a decent meal,. The play features an in-house band called “The Craze”, consisting of Jason Rabinowitz (lead vocals), Austin Moorhead (lead guitar), Charlie Rosen (bass) and Jacob Colin Cohen (percussion), who performed three songs “IOU”, “Just My Luck” and “The Brighton Line”.

The final performance of the afternoon was from Mamma Mia, currently playing at the Winter Garden Theatre, and is about a daughter’s quest to find her father and a mother confronting her past all set to ABBA songs. The leads Judy McLane, Felicia Finley, Stacia Fernandez and much of the ensemble were on hand to sing a selection of songs from the show, including “The Winner Takes It All” “Mamma Mia!”,  “Dancing Queen” and “Waterloo”. 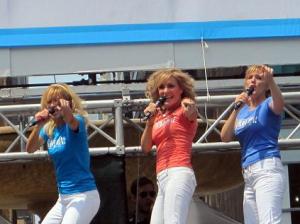 Once again, it was a highly entertaining afternoon, despite the heat and humidity.