Best known for her roles in In the Heights and Wicked, Mandy Gonzalez is a Broadway singer/actress with a considerable vocal range who recently made her cabaret debut at 54 Below singing an eclectic mix of songs from her various stage roles and pop/rock songs. She is also a quasi-acquaintance of mine (somewhere between being a fan and a friend), as I had first met her when she was in the short-lived Dance of the Vampires and was blown away by her impressive vocals (and probably one of the few actors that I have seen on stage who could match the vocal intensity to share the stage with Michael Crawford as they had when they sung “Total Eclipse of the Heart”). When I had first met her at the stage door all those years ago, I recall telling her that she’d be a Broadway star, and sure enough, she has fulfilled that prophesy.

54 Below is a perfect venue for her to make her cabaret debut, as that space is intimate as well as infamous – its location (as the venue name suggests) was where the famed Studio 54 was located, not too far from the Times Square area. The venue itself is relatively new, having opened in June 2012, and has quickly become a hub for theatre cabaret shows, with the likes of Patti LuPone, Norbert Leo Butz, Aaron Tveit, Sherie Rene Scott (to name but a few) taking to the stage to perform to an audience that are at arm’s length from the stage.

Dressed in a black sequin top and black leather pants, Mandy started the show with a bit of “Defying Gravity” from Wicked, exuding lots of spunk and sass before segueing into a brief fit of nerves from doing her first solo show, to which the musical director advised her to just “Breathe” (a reference to one of her songs from In the Heights). She didn’t sing all of “Defying Gravity”, as she wanted us to “get to know her better” before she went on to belt that song out (which garnered some laughs).Among the non-theatrical songs she proceeded to sing (and belt) were “A Little Less Conversation”, originally sung by Elvis Presley, Prince’s “Kiss”, and the Queen song “Crazy Thing Called Love”; she also sang The Temptations’ song “Get Ready” both with an upbeat tempo and also as a haunting torch song – in between these two renditions she spoke of her family and their influence on her life and career. She then spoke of her parents and the love letters they had written to one another early in their courtship and remarked how her father would sign his letters “Love always” but spelling it “wrong” so that it read “love all ways”, which no doubt was the inspiration behind her naming her first cabaret show “Love, All Ways”. She then sang “Total Eclipse of the Heart” (the longer version of the song with its original lyrics), which was greeted with much applause and cheering, especially as she belted out and riffed the final notes as she had done at the final performance of Dance of the Vampires. There was also a portion of the show dedicated to her experiences in In the Heights, including a confession that she never really learned how to speak Spanish growing up, and how there had been several different songs for her character Nina’s first song in the show – she sang one of those songs (I can’t remember the exact title) then sang “Breathe”, the song that ended up in the show. At the end, she finally sang the entirety of “Defying Gravity” which earned her a standing ovation from the audience. For an encore, she sang “The Best in the World” from A Day in Hollywood / A Night in the Ukraine as a tribute to Priscilla Lopez, her co-star in In the Heights, who had originally sung; Ms. Lopez was in the audience, and Mandy had acknowledged her as being a valued friend and inspiration. 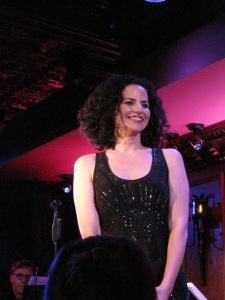 She lingered about after the show, greeting friends and fans alike, posing for photos and such, conversant and personable as she always is. Though she only performed for one night, there has been talk of future shows (including a return engagement at 54 Below some time in 2014!) and I sincerely hope there will be more opportunities for those in New York City (and perhaps elsewhere) to hear her amazing voice and experience her vivacious personality.

Broadway in Bryant Park is a free event held for six consecutive Thursday afternoons in July and August which features performances from four to five different Broadway and Off Broadway shows, presented by 106.7 Lite FM, a local NY radio station, and hosted by one of their radio personalities. As it is a free event, and the fact that Bryant Park is a public park, there is no assigned seating (or formal arranged seating for that matter) and you would need to get there early to ensure you have a good view of the stage. Naturally (as my wont) I arrived at Bryant Park hours before the event started and set up my own chair as close to the stage as I could on the lawn (there is a gravel area in front of the grassy area where chairs and tables were set up for the press and reserved seating for the VIPs, which were usually contest winners or employees from the sponsors).

The weather was overcast and pleasantly breezy, a sharp contrast to the heat and humidity that had been lingering in the past few days. The chairs for the general seating area were set up shortly after I arrived, lined up in rows of six with space for walking aisles; thankfully where I had situated myself was compliant with the seat arrangement. By 10:30 the seats began to fill with families, couples and individuals, and the sound check commenced shortly before 11AM. As it was quite an overcast morning, the threat of rain was omnipresent; in fact there were a few minutes of misty rain, which caused the stage technicians to scramble to cover up the electrical equipment (thankfully the rain didn’t return until later on that evening).

The shows that were scheduled to perform were Ghost the Musical, Cirque du Soleil: Zarkana, Sister Act, Memphis and Wicked, and often at these events, the understudies, standbys or ensemble members perform, though occasionally the leads do perform. Each show performs a few songs from their respective shows (though in the case of Cirque du Soleil: Zarkana, the cast performed scenes from their show). The 106.7 Lite FM host was Christine Nagy.

First to perform was Cirque du Soleil: Zarkana, currently playing at Radio City Music Hall until September 2, 2012, and is about a magician in search of his lost love. As with most Cirque du Soleil shows, the performance featured flag throwers (Federico Pisapia, Vincenzo Schiavo, Giuseppe Schiavo and Marco Senatore) and a pair of clowns (Larry Wayne Wilson and Daniel Passer) performing a humorous sketch involving bouncy (and not-so-bouncy) balls. Several other cast members (Jason Nious, Jeremie Robert, Michael Duffy and Tom Cholot) and musicians (Keith Paraska, and Peter Fand) wandered about the crowds as well. 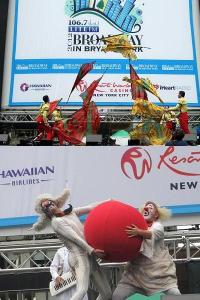 Next to perform was Wicked, currently playing at the Gershwin Theatre, and tells the back story of Elphaba and Galinda, who would later be known as (respectively) the Wicked Witch of the West and Glinda the Good Witch in The Wizard of Oz. Standbys Donna Vivino and Kate Fahrner perform three songs: Donna Vivino sang “The Wizard and I”, Kate Fahrner sang “Popular” and both sang “For Good”. 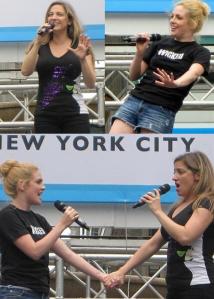 Next was Memphis, currently playing at the Shubert Theatre until August 5, 2012, and tells the story of Huey Calhoun, an aspiring white DJ and Felicia Farrell, an aspiring black singer in 1950s Memphis and how (to paraphrase the show’s marking tag line) his vision and her voice gave birth to rock ‘n’ roll. Ensemble members Kevin Massey and Dan’yelle Williamson perform three songs: Kevin Massey sang “Music of my Soul”, Dan’yelle Williamson, sang “Colored Woman”, and as this was be the last time the show would perform, both sang a medley of songs, which included “Steal Your Rock  ‘N’ Roll”, “Underground”, “Radio”, and “Love Will Stand When All Else Falls”. 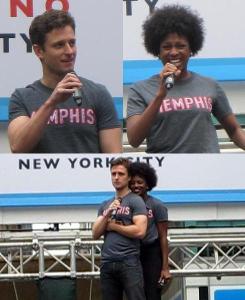 Next was Sister Act, currently playing at the Broadway Theatre until August 26, 2012, and is based on the movie of the same name. Standby Rashidra Scott, along with ensemble members Alena Watters, Lael Van Keuren performed two songs: “Fabulous, Baby!” and “Sister Act”. 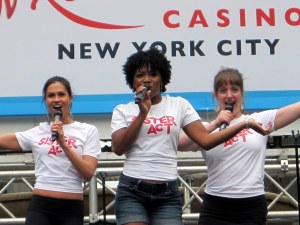 The final performance of the afternoon was Ghost the Musical, currently playing at the Lunt-Fontanne Theatre, and is based on the movie of the same name (and interestingly enough both Sister Act and Ghost the Musical both have Whoopi Goldberg in common).Leads Richard Fleeshman, Caissie Levy, Da’Vine Joy Randolph performed three songs: Richard Fleeshman and Caissie Levy sang “Here Right Now”, Richard Fleeshman sang a guitar-rich version of “Unchained Melody” (and had some initial technical difficulty with his guitar) and Da’Vine Joy Randolph sang “I’m Outta Here”. 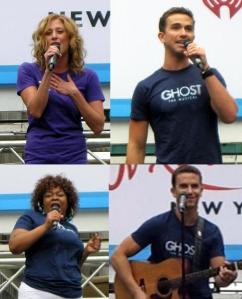 I don’t recall when the Broadway in Bryant Park concert series began, but it’s another great (free) way to listen and see a sample of shows that are currently on Broadway (though three of this week’s five shows are scheduled to close within the next two months)*. Sometimes upcoming shows are also included in the series, which gives those shows an opportunity to present a sample of what is to come next season. It’s also a great way to spend a lunch hour listening to great theatre actors sing great songs.